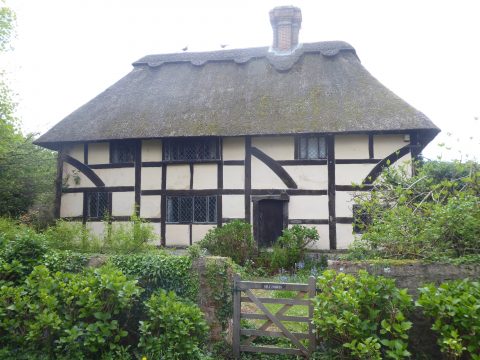 West Burton is a spring-line hamlet in the Parish of Bury, one mile NW of Bury village (and one mile SE of Bignor). It is connected to Bury by road and by the aptly named Coffin Trail. It is recorded as a Saxon hamlet, but may even have Roman origins given its close proximity to Stane Street and Bignor Roman Villa.

The majority of houses are mediaeval structures of timber frame and/or local stone. 26 houses (70 per cent) are Listed Buildings Grade II, whilst Cookes House (c. 1588) is Grade II*. The Lillywhites hall house was built 100 years earlier. Only seven houses date from the 20th Century.

West Burton was an agricultural community up until the Second World War, with the main farms being Cross Street Farm, Lower House Farm and West Burton House. The 19th Century owners of West Burton House owned much of the hamlet, other owners being the Dale Park Estate, the Leconfield Estate and the Norfolk Estate. 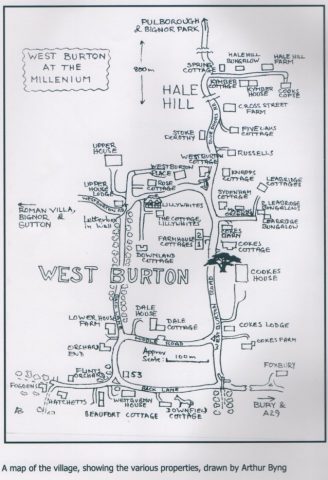 All of the houses and their recent occupants are photographed in the booklet West Burton 2000, published to celebrate the millennium. Life in West Burton in the 1920s is described by Evelyn Pentecost in Chapter 15 of A Shepherd’s Daughter, The Window Press, 1987.

West Burton was formerly well known for apple growing. In 1839 there were 16 orchards in the hamlet, and Cokes Cottage still has a prominent stone cider barn. There is now a revival of interest in cider making. At Pill Pond there are half a dozen heritage variety apple trees planted in the 1990s, the apples of which were juiced at the first Bury Apple Festival in the autumn of 1990.

A chalk stream originating in Bignor passes through West Burton, supplying Pill Pond and the lake at West Burton House, before flowing onwards to Bury. The former and its margins was awarded as a Common to Bury Parish Council under the enclosure award of 1854. The Pond was formerly double its present area, and was probably a mill pond.