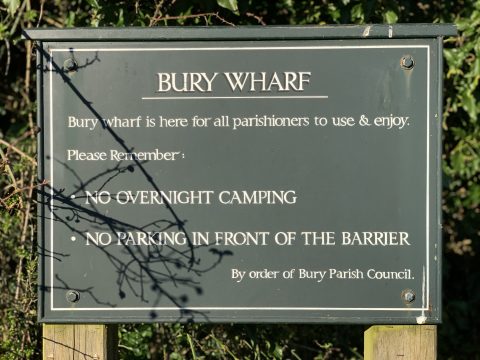 Bury Wharf has a fascinating history. For many years busy with goods being transported along the River Arun, it was also the setting of a historic ferry service that for centuries linked the communities of Bury and Amberley.

Before motorised transport, three barges, Neptune, Mayflower and Old Sixty-nine were used to bring timber and coal to the village and ‘export’ sand, chalk and lime from the lime works at the foot of Bury Hill. For children’s outings, the barges were cleaned and towed by gaily bedecked horses to the Black Rabbit in Arundel or to Climping on the coast.

The river was dredged and the embankments built in 1964 to prevent flooding. Prior to this, the land, from the churchyard wall to Amberley Castle to the East, was often under water.

The area was allotted to the Churchwardens and Overseers of the Parish of Bury as a wharf under the Enclosure Award of 1854.

Bury Manor, now a school, lies behind this noticeboard and has an extraordinary history. Records show that in 1066 it was owned by Countess Goda, sister of Edward the Confessor.

The stream which flows from the pond, where watercress once grew, used to be the sheepwash. Before the embankment was built, this stream was open to the river and was crossed by a wooden bridge. By the steps, it reached the Ferry Hole, where Bob Dudden, the last ferryman, taught local children to swim.

No-one knows how long the ferry was in existence but it certainly operated for many centuries. The Right of Ferry was held by the Dukes of Norfolk who appointed the ferryman and provided a cottage and boat. The timber framed Jessamine Cottage was home for ferry workers before Ferry Cottage was built in the 18th Century. 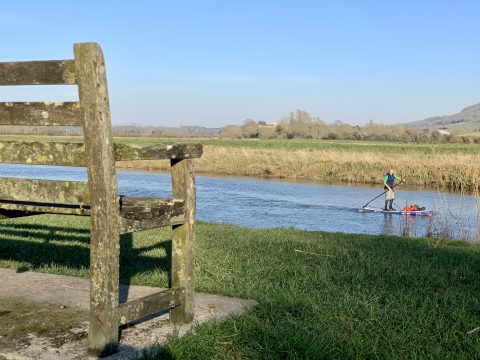 Bob Dudden (1882-1964), an ex naval man, held the office of ferryman from 1927 to 1955 when he became ill and the ferry was closed soon after. For many years, Bob and his wife Minnie owned a parrot, Polly, which perched in the trees by their cottage, verbally challenging all who passed by.

Ada Marshall (1882-1923), mother of eight children, helped at times by her husband William, was a ferrywoman, as was her mother Jane Shepherd (1842-1915). Mrs Shepherd, mother of 13 children, was said to have ‘worked the boat as well as any man’. The fee was one penny for parishioners and tuppence for strangers.

During the Second World War, the Royal Canadian Engineers, who were stationed in the district, washed their vehicles here.

After the war, members of the London Anglers Association came by the coach-load. For 30 years until 1960, the Wharf area was a car park, the fees going to the Parish. Last ferryman Bob Dudden was in charge and received 25 per cent commission. The spot was popular with day-trippers, who would cross the river for a walk by the meadows to Amberley, hire boats, bathe and enjoy the beauty about them.

But in 1960, due to the ‘unseemly behaviour’ of the public, the Parish Council decided to close the car park. The Parish landscaped the area in Jubilee year 1977 and restored the ferry steps in 1997. In 2020, Bury Parish Council provided an updated information board, relating a little of the history, flora and fauna of the spot.

‘Iris; forget-me-not; mint, marigold; meadowsweet and meadow rue; rose bay, valerian; tansy and tall willow-herb; loosestrife in purple spires and its
namesake-though no kin, the great yellow loosestrife; all with reeds and grasses making delightful fringe to the river and haunts for multitudes of water-fowl
and small creature.’
From All About Bury, by Lilian E Brown, published in 1947

Pill Pond is believed to have been a mill pond, and could possibly have been the mill that supplied the Roman villa with flour, as it is the only location in the vicinity where the topography and river would be suitable for a mill. (There is also an extant footpath leading directly from the villa to the pond.) The topography suggests that the remains of a bund a little further downstream would have been the original margin of the pond, which would have been larger than the present pond.

The pond isn’t shown on the Bury Tithe Award Map (c.1839), it could have been abandoned by the time of the 1839 map. By that time, local windmills would have been milling on an industrial scale. It is shown on the OS 25” 1st edition (c.1875), on which it looks as if it’s an integral part of a little system of trackways that no longer exists. At that time it could have been a sheepwash. Pill Pond was awarded as a Common under the enclosure award 1854. 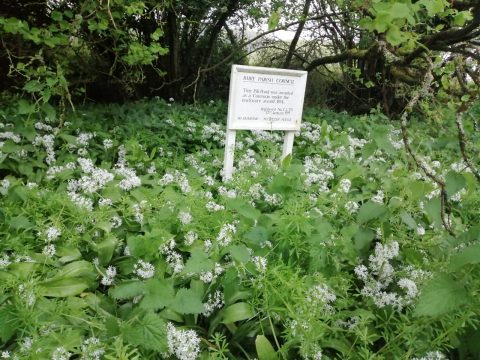 The pond is prone to silting up and in 2020, Bury Parish Council undertook a dredging operation, as well as the creation of a silt trap and a filtering reed bed, along with repairs to the dam, in order to enhance the pond’s role as a wildlife haven and a place of tranquility for parishioners to visit. In May, the area is a mass of wild garlic.

Bury Recreation Ground was allotted to the Parish Officers in the 1854 Bury Enclosure Award. It was subsequently registered by the Parish Council in the 20th Century as Common Land. For many years the Recreation Ground has been the home of Bury & West  Burton Cricket Club, reputed to be one of the oldest villages cricket clubs in the country.

In her book Through Bury’s Doors, Gwen Squire relates an interesting story related to the wooded area of land to the East of the Recreation Ground. There was once a small cottage here, allocated by Parish Officers to the poor. For many years in the late 19th Century this was occupied by Leonard and Phylllis Smart, who kept a small orchard and garden here, complete with pigs and chickens. After their deaths in their 80s, the cottage became derelict and the garden overgrown.

Some of the building materials from the cottage were used to build the ‘scoring room’ for the cricket club in around 1900. The cottage at that time was nicknamed, rather cruelly, ‘the Palace’.

A walk around this part of the Recreation Field reveals some remnants of Mr and Mrs Smart’s fruit trees still exist and it is not difficult to imagine the flourishing smallholding they once created there.

Coates sand pit was once a source of income for Parish Officers as anyone other than parishioners had to pay to take sand from it. Indeed in the early 1900s the padlock was smashed presumably by someone reluctant to pay the 6d or so charged for a load.

Bury residents still have a legal entitlement in theory to take sand from the pit. However, recently the site has become seen as more valuable as a site for the encouragement of wildlife.

In 2020, in South Downs National Park Authority, in partnership with Bury Parish Council, carried out works at the sand pit, felling trees that had suffered from Ash Dieback and hand-drilling holes in the sheer face of the sand to create sand martin nesting chambers.

Sand martins are social birds and will nest in groups in holes excavated into sandy banks, where they are safe from predators. Sand pits such as ours make ideal homes and it is hoped the work will attract a new population for this historic parish asset.