Postcards from the past

On his website, the Arun Valley Postcard Trail, Tony Pratt presents a delightful series of short documentary films based upon his collection of antique postcards from communities around the River Arun. His video on Bury offers some enchanting insights into the village in the past and is well worth a viewing. Watch it here.

Oyez! Oyez! in The Square

As late as the 19th Century, the sexton proclaimed any unexpected alteration of the time of [church] service, or of cancellation, by first ringing a bell and then making his announcement in the Square. An old man told Mr [the Rev J. E.] Sale he well remembered hearing the cry: “Oyez! Oyez! No service today. Parson’s got the gout.”
From All About Bury, by Lilian E Brown, published 1948.

[During the Second World War] Canadian soldiers were to be billeted in the two requisitioned cottages which are now Bankside opposite the church and the owner was furious that this had happened to her empty properties. She stormed down Church Lane with some sort of strong implement in her hand, reached the cottages and started smashing the windows and doors so that the buildings would be uninhabitable.

Some Canadians saw her and marched her swiftly up the road with fixed bayonets until they reached their Headquarters and handed her over to their Commanding Officer. He dealt with the matter and, after the necessary repairs were carried out, a group of soldiers moved in.
From Bury At War, Through Bury’s Doors, 2006, by kind permission of Gwen Squires.

A cartload of carrots

All the men in the village grew their own vegetables years ago and there was great rivalry as to the size of parsnips, carrots and leeks, the secrets of growing them hidden behind quiet, wry smiles.

Mr Penfold brought his massive vegetables [to the Bury Horticultural Society shows] from the then named Pyracantha Cottage by the telephone kiosk [removed in 2020] in the coffin cart [used to transport the deceased from West Burton along the Coffin Trail to Bury church for burial] an enormous wooden, two-wheeled cart with iron tyres, which ground their way noisily along the road. He was always all smiles; of course, as he knew his vegetables were superb and would take a lot of beating!
From Kathy [Barnett] Remembers, Through Bury Doors, 2006, by kind permission of Gwen Squires.

At the local pub, The Black Dog and Duck at Bury in West Sussex in 1944, 29-year-old Land Girl Rosalind Cox shows her Women’s Land Army armband to local farm labourer Sam Scott. Sam is 60 years old and has worked as a labourer since he was 10. He is admiring the four diamonds on Rosalind’s armband, additional to the crown and the letters ‘WLA’. Each diamond signifies one year of service with the Land Army.
Source: Ministry of Information Photo Division. Photographer: Smith Jack

Brandy in the bush

A remembered story tells how once a band of “gentlemen” on their way to London from the coast had almost reached the top of the hill coming from Slindon way, when they were surprised by a company of preventive men. The smugglers –some of them belonging to Bury – although loaded, got safely away, being better acquainted with hillside tracks and byways. “Safely”, that is, except for a small part of their booty. For one man, stumbling, let fall a tub of brandy which rolled on and on until lost to sight among the bushes. With the officers close on their heels, they dare not stop and search for it; later, with a clear coast, they returned, but despite long hunting the tub could not be found; it was therefore concluded the preventive men had picked it up. Years afterwards it was discovered, quite by accident, lodged in a bush. Whose it became history does not say. Probably the lucky villager said “Findings is keepings”.
From All About Bury, by Lilian E Brown, published 1948.

In 2017, Sussex Past and Present, the magazine for members of the Sussex Archeological Society, published an article by Matthew de la Pole arguing that Bury in Anglo-Saxon times may have been an early medieval port. The article was based upon Mr de la Pole’s research for a masters degree at Winchester University. Click here to read the article. Mr de la Pole’s full dissertation can be read here:

On patrol with Dad’s Army

When, in 1940, men were invited to join Local Defence Volunteers, later to be called the Home Guard, my father [Alfred George Hall] offered his services. During the 1914/18 War, he had served in the Royal Sussex Regiment in France, Gallipoli and Mesopotamia and by the end of that war he was a Regimental Sergeant Major.

Mr Tilling, who lived nearby at The Copse, Bury Gate, was appointed as the nominal head of the Bury Home Guard and my father became second in command. He was able to use his military experience to ensure the men became properly trained and organised. My mother [Edith Hall] also offered her services and she was appointed cook. She was very proud of her Certificate of Appointment. I think Bury Home Guard’s official Headquarters was at the Village Hall but the unofficial HQ was certainly The Black Dog and Duck!
From Memories Of Bury from Daphne (Joan) Morris (formerly Hall), Through Bury’s Doors, 2006, by kind permission of Gwen Squires.

My home, The Black Dog and Duck 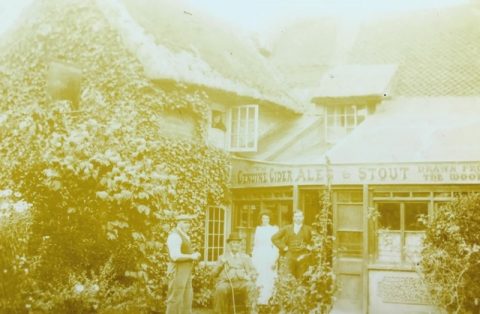 I lived [at the Black Dog and Duck]  from 1959 through 1966, when my mother Barbara Joan Kneller died. She was the life and soul of the pub and was a leading light in the Licensed Victuallers. The building was originally a couple of farm labourers’ cottages and started when cider was sold to the “Navigators” building, firstly the Arun canal and later the Southern Railway across the nearby Amberley Wild Brooks. I remember the remains of the cider apple press and visited the apple orchard near the local church.

I have several photographs and a video captured from TV showing [conductor] Sir John Barbirolli and [contralto singer] Kathleen Ferrier outside the old wooden public bar. In my time, this had been replaced by a brick structure. There was a small saloon bar, a public bar and a tap room, where darts were played. The main game in the public bar was cribbage. All beer was drawn from the wood until the arrival of Watney’s Red Barrel in about 1961. We served meals in our dining room and a later owner discovered a large inglenook fireplace hidden behind plaster board. In about 2000, the pub was closed and sold as a private residence.
By Richard Kneller, from closedpubs.co.uk. Photograph circa 1905

When he was about ten or eleven years old, [Fred Turrell] used to take the horse and cart to the chalk pit at the foot of Bury Hill, load the cart and take the chalk to fill badly eroded holes in gateways on the farm. He also collected sand from Bury Parish Council’s sandpit [Coates Sandpit] and took it to Bury House for the gardeners to work into the soil to lighten it. At other times, he and his father [Authur Turrell] cut a cart-load of faggots from their copse and took it to Mr Hazelman the Sutton baker to heat his bread overn. Fred particularly enjoyed these trips as they stopped at The Old Shop in Bignor to buy some sweets and we can just imagine father and son smiling contentedly as they wound their way home.
From Fred’s Story, Through Bury’s Doors, 2006, by kind permission of Gwen Squires.

There is a lot to tell: how the gentry in our only big house in the village (once lived in by John Galsworthy) used to bring frocks down for me which their children had grown out of (I think I was about four), my sister said they were lovely and she used to envy me; how we used to share the harvest loaf from the church harvest festival; how we used to have a bath in the ditch which was attached to the orchard – and it was called a “dog bath” I believe – the boys and girls used to come from next door, and Mum used to keep the girls with her while the boys bathed and the girls waited for their turn. I remember she used to hang sheets on the spider’s web of clothes lines in the orchard to make it private.
From My Country Childhood, by Winnifred Janes. The full article was published in the October 1986 issue of Country Living magazine. Winnifred (nee Garman) spent her girlhood at Jessamine Cottage in Church Lane early in the 20th Century. The orchard has now sadly gone.

All smiles in the Sixties

On YouTube, Richard D Wood-Kelner, who grew up at Bury’s Black Dog and Duck, now a private residence, in the 1960s, has posted a video that seems to show villagers turning out at the pub for what is clearly a special occasion during those now far-off days. Sadly there is little accompanying text to explain proceedings. Nevertheless, the scenes of smiling locals and, indeed the accompanying song As Time Goes By, provide a nostalgic glimpse of life in the village around 60 years ago. See the video here