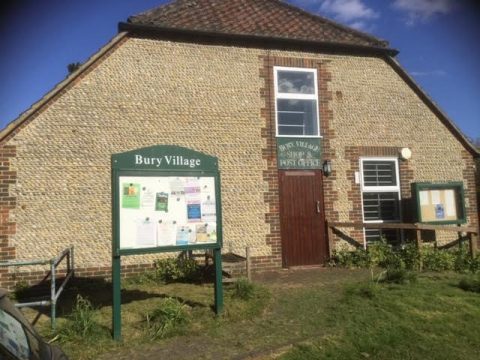 Over the last month or so, Bury Parish Council has invited parishioners to complete a survey on our plans for a redesigned village hall that would provide a new, flexible social space in which we could operate a coffee shop, some limited retail and various social activities. Our survey was conducted both via forms delivered to every household with our recent magazine, and online.

With the closing date for entries being the last day of July, we are now able to provide an early overview of our survey’s results. And it’s a big thumbs-up for our plans for new-look village hall playing a more central role in our community.

In total, we have received just under 50 responses, which represents around 15 percent of the households in the parish. We might have hoped for a greater take-up, but in a way this figure reflects the fact that the village hall in its present guise does not register greatly with many Bury residents, either in their thoughts or their daily lives. This is something we hope our exciting plans will significantly change.

Among all those who did respond (excluding three online responses which did not provide a name), the creation of a new social space/coffee shop/village store found overwhelming favour, with 84 per cent saying it was Very Important or Important.

Earlier in the day were the favourite opening times, with 74 per cent saying they would use it from 8am to noon, and another 55 per cent from noon to 3pm.

Our plans would be dependent on there being sufficient volunteers to man the new social space during limited opening hours and we were heartened to find that around a third of respondents indicated they might be prepared to volunteer to staff it.

Favourite items to be available in the coffee shop were fresh tea and coffee (96 per cent) and homemade cakes and pastries (93 per cent).

The responses on both what the coffee shop should offer and what retail goods might be made available will now be analysed in greater depth moving forward, as will the many suggestions that people made for additional foodstuffs and retail items.

In terms of social activities, coffee mornings were a favourite with 60 per cent of respondents, and the idea of a book club found favour with 37 per cent.

We would like to sincerely thank all those who found the time to complete our survey. Your contribution is invaluable as we move forward in deciding the final details of this project.

It is the parish council’s intention now to commission a quantity surveyor to cost the outline proposals for the village hall changes we most favour. Once this has been achieved, a full consultation with the community will take place, setting out detailed plans, costs, funding proposals and your own feedback. This consultation will take the form of an exhibition at the village hall and public discussion (Covid allowing), along with material available on the parish council website, via our newsletter and on social media, along with video appearances by some of our parish council members.

It is also our intention to create a steering group to guide the project forward, which would comprise parish councillors and members of the community who have indicated a willingness to take part in this way.

It is still early days but we believe this is an exciting project and we look forward to working with you all as we seek to deliver a great result.